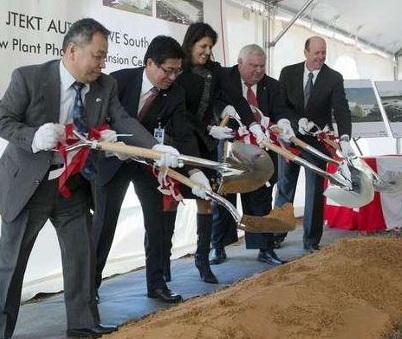 One hundred new jobs will follow a $100 million investment being made at the JTEKT Automotive plant in Piedmont.

At the time, the company, with a global headquarters in Japan, said its new addition will increase JTEKT’s driveline component capacity and flexibility.

On Wednesday, Gov. Nikki Haley joined company executives there for an expansion celebration which included a ceremonial groundbreaking underneath a big white tent, followed by a tour inside the existing plant.

The sound of bulldozers near the ceremony was “jobs, jobs, jobs,” said Haley.

Haley, who said she has visited the company in Japan, said JTEKT brings “great quality and great class to this state.

The official kickoff for the Piedmont expansion is the start of a new chapter there but not a new book, said plant manager Drew Rowe.

“We will continue to focus on the principals that brought us from a plant of three people in 2000 to 240 now,” he said.

JTEKT’s Piedmont project is being done in phases. Construction on the 290,000-square-foot first floor of the building is expected to be partially completed by August, company leaders said. Operations are expected to begin in April 2014.