SKF had a ground-breaking ceremony to formally begin the construction of a new SKF Campus on 18 October 2012 at Jiading, Shanghai.

The new Campus will include a new automotive factory for production of wheel hub bearing for passenger cars as well as the relocation and expansion of the Global Technical Centre China (GTCC), SKF Solution Factory and SKF College to the new site. The GTCC includes product development, engineering services, global metallurgy and chemistry labs, manufacturing process development, testing and product investigation. 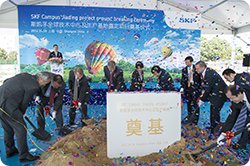 The total investment in this new campus is around RMB 700 million. It will cover an area of 45,207 square metres, have a building area of 32,325 square metres in 1st phase, and employ around 900 people in 2015. Construction will be according to LEED certification standards and is due to be completed in Q4 2013. “The new campus will integrate SKF’s resources of product development and engineering, manufacturing, testing and training to guarantee our leading position as a knowledge engineering company,” said Mr Erik Nelander.

Mr Torsten Nordgren said: “The establishment of the new automotive factory, together with the Technical Center will further strengthen SKF’s manufacturing and engineering footprint in China and enable us to even better support our automotive customers with higher speed and increased engineering and testing competence and resources in the future”

The campus is located in an auto parts industrial park of the Shanghai International Auto City in Jiading, Anting town, which is famous for its mature support industries for the automobile industry. Close to several major SKF automotive and other customers, as well as technical universities and engineering institutes, the campus will further accelerate the integration effect of the industrial park, and provide SKF’s customers with more convenient and complete integrated resources for the industrial chain.

SKF is a leading global supplier of bearings, seals, mechatronics, lubrication systems, and services which include technical support, maintenance and reliability services, engineering consulting and training. SKF is represented in more than 130 countries and has around 15,000 distributor locations worldwide. Annual sales in 2011 were SEK 66,216 million and the number of employees was 46,039. www.skf.com

SKF started its business in China through agent from 1912, and established the first sales branch in Shanghai in 1916. Now, the number of employees of SKF in China is over 7000. There are 18 production units and many sales and service units, providing our customers with high quality products and services. The headquarters of SKF China is located in Shanghai.