EPTDA Sets the Growth Course for 2013 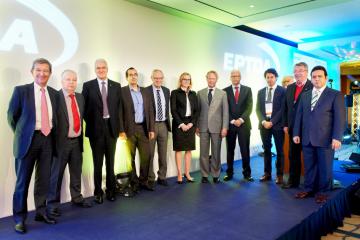 Looking back on 2012, EPTDA paved new business paths for its members, welcoming nearly 20 companies from the EMEA region and connecting with several other potential member candidates at its Annual Convention in Lisbon. New tangible benefits were offered to the effective members to help them stay competitive in a constantly evolving environment. Education was one of the flagship projects that kicked off in 2012, providing executive learning programmes, carrying on in 2013 with continued education platforms for meeting the needs of the PT/MC industry. Tailor-made economic outlook and industry market forecast were introduced as a complement to the existing range of business tools for members.

2013 will be a special year, not only because of its new projects, but also because EPTDA is celebrating its 15th anniversary. The organisation was founded in 1998 by captains of the PT/MC industry who believed in the power of bringing together qualified distributors and manufacturers on one common platform. Today, this association is stronger than ever, and is gearing up for a new era of further changes for the better.

Thorsten Kott, Managing director of Anton Klocke Antriebstechnik declares: “We want to find ways to improve the business and therefore secure our profitability. We want to unite on important issues and share resources in the community. EPTDA is a smart way to network with entrepreneurs of the power transmission and motion control industry. It creates an atmosphere that encourages competition and attracts new customers.” Anton Klockedevelops and distributes strategic components for drive, vibration and textile technology. Bührig-Adam Wälzlager und Antriebstechnik GmbH, a German distributor as well, came on board recently. Founded 65 years ago, the business operations of comprise a multi-facetted and diversified portfolio, from technical wholesale trade via service such as technical consulting, customised logistics concepts up to installation and maintenance work in the fields of hydraulics, filtration and centralised lubrication technology. Newcomer SBN Wälzlager GmbH added on to EPTDA’s German representation. SBN is a family business specialising in precision bearings. Their main product lines include EZO, INA and TPI bearings. SBN is the sole agent in Germany and the Netherlands for EZO and TPI bearings.

As a result of the business value its platform and services generate,EPTDA is gradually raising interest beyond Europe, attracting companies from the Middle-East & Africa region. Besides Egypt (MRO distributor and service provider DEG), South Africa (distributor Bearing Man Group) and Nigeria (distributor Daid Nigeria), EPTDA expanded in Dubai (United Arab Emirates) as it welcomed Rolman World FZE, one of the largest and well established distributors of bearings and related technical services in the Middle East and North Africa (MENA). Rolman is an authorised distributor for NSK in the MENA region and one of the largest stocklist of bearings carrying a vast range of products for applications in the automotive, agriculture, transport, oil and gas, food processing and other industrial areas.

Enlarging its portfolio in Eastern Europe, EPTDA was pleased to welcome TLC Lozyska,a well-established authorised distributor of Schaeffler and Gates with five company branches across Poland. TLC Lozyska provides ball and roller bearings, transmission belts, sealing technology and maintenance tools. In just 13 years since start-up, the company became one of the major bearing distributors maintaining the highest standards of customer service and technical support according to EN ISO 9001:2008 certificate. Their customer base includes large MRO customers such as mines, steel mills, power plants as well as trade sector/bearings and transmission parts distributors.

EPTDA increased its manufacturer membership base as well with the addition of Suebel Seals Belgium. Established in 1952, it is one of the experienced seal manufacturers in Europe. Offering a complete range of Rotary shaft Seals and Hydraulic/Pneumatic Seals up to 3000mm within a few days with the advanced technology and hi-tech equipment in more than 50 different sealing materials.

“We are pleased to see that the tangible value generated by an organisation like EPTDA is being increasingly recognised by companies in the industry, across Europe and also beyond,” Hans Hanegreefs, Executive Vice President of EPTDA, explains. “It shows that EPTDA is able to provide businesses with the support they look for in crucial times, and similarly generate profitable solutions on a continual basis.

After an impressive “short” journey of 15 years, EPTDA prepares to unveil new programmes, attractive advantages and key events in 2013. Growth with geographical expansion, especially in Easter Europe, is one aspect of EPTDA’s strategic goals. Providing tangible benefits and custom-designed education are keys as well in this year’s strategic plan. In 2013, a strong focus will be put on the latter two components, with the launch of the EPTDA Academy Continued Education programmes and certification, along with dedicated market analysis and forecast online portal for members only,” Hanegreefs adds.

Save the date:
All these PT/MC professionals will convene alongside 350-400 industry decision makers from across the globe at the next Annual Convention of EPTDA, celebrating its 15th anniversary, on 18-20 September, in Venice, Italy. For more information about this major PT/MC professional event, log on to http://www.eptdaconvention.org